We have the following descriptive statistics maps depicting the regional differences in average proportion of people who participate in volunteering organizations and/or volunteering activities.

Volunteering in any organization roughly follows an Elazar pattern.

Note where and how this differs from a religious participation map: 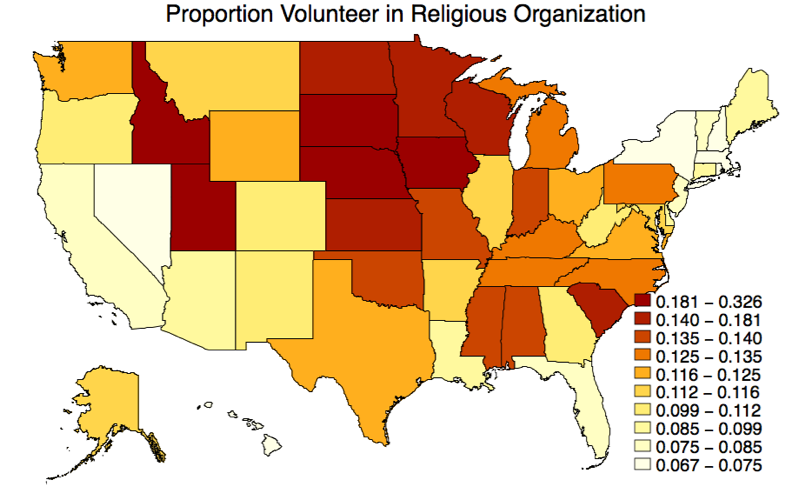 (Definition: Since September 1st of last year, (have you/has NAME) done any volunteer activities through or for an organization?

A:  “Religious organization” is one of the organizations. This classification is made by the interviewer, i.e. the respondent will say “I volunteer at the LDS church”, or if they don’t know the name, will be asked to describe the type of organization)

The non-Mormon Mountain West does not participate religiously as much, nor the pacific northwest, yet its overall civic participation is on par with much of the rest of the Midwest. Similarly, in New England, the participatory tradition remains although religious participation has decreased.

The arts, meanwhile, reveals a more individualistic pattern. Volunteering in an arts organization is also notably distinct from participating in an arts volunteering activity, where people may often do artistic activities in the name of religion or other organizations. 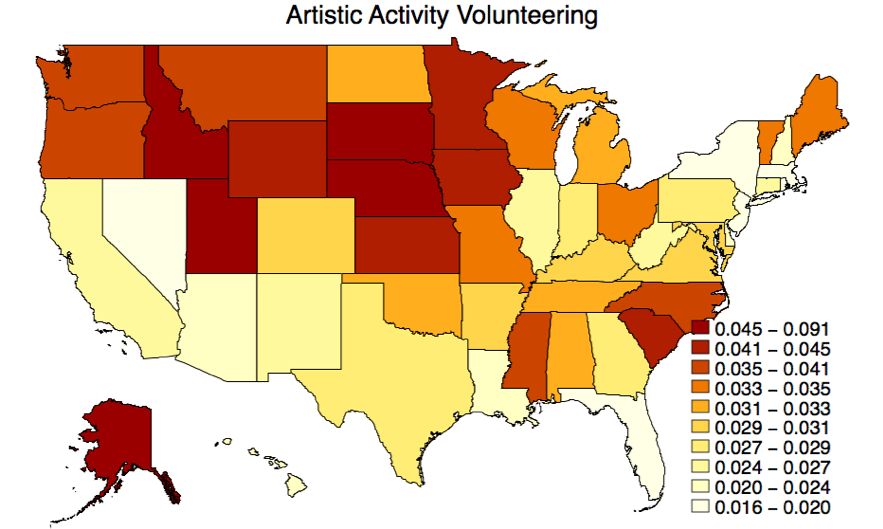 Another question that resembled participation in arts/cultural organizations (though is certainly not limited to artistic organizations) similarly drew higher responses:

Despite an increase in environmental and political organizations, participation therein remains below 2% for environmental (which includes animal) and below 1% for political. People rarely explicitly say they regularly volunteer with these causes.

However, ask about political activity, and the story is different. 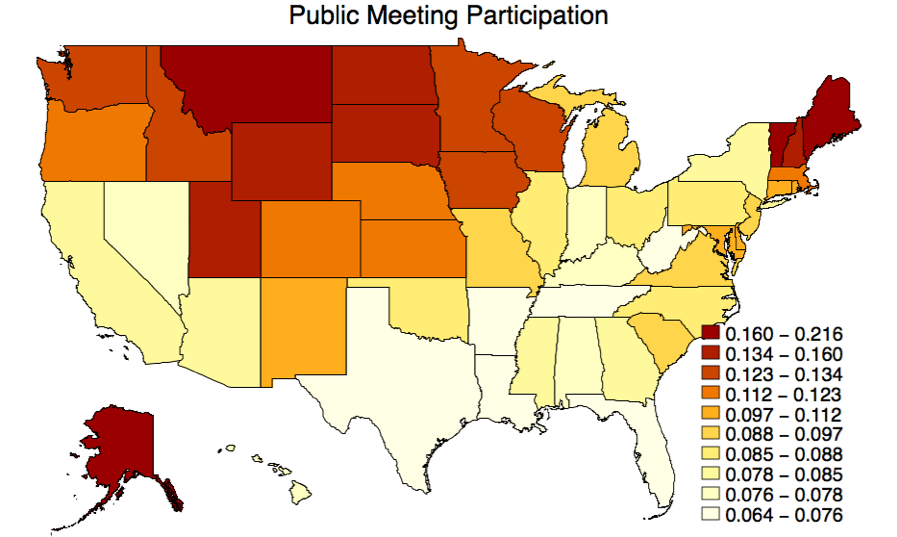 (Definition: “Now I’d like to ask about some of (your/NAMES) involvement in (your/his/her) community. Since September 1st, 2011, (have you/has he/has she) attended any public meetings in which there was discussion of community affairs?”)

Substantially more people attend public meetings (again, concentrated in the pacific west, mountain west, Midwest, and new England). Thus, while people may be engaging in political activity, they don’t consider this political activity to be political. More explicit information would be needed, but if 20% of people in Utah say they attend public meetings, it is hard to imagine that only a half percent of people in Utah are engaged in politics. 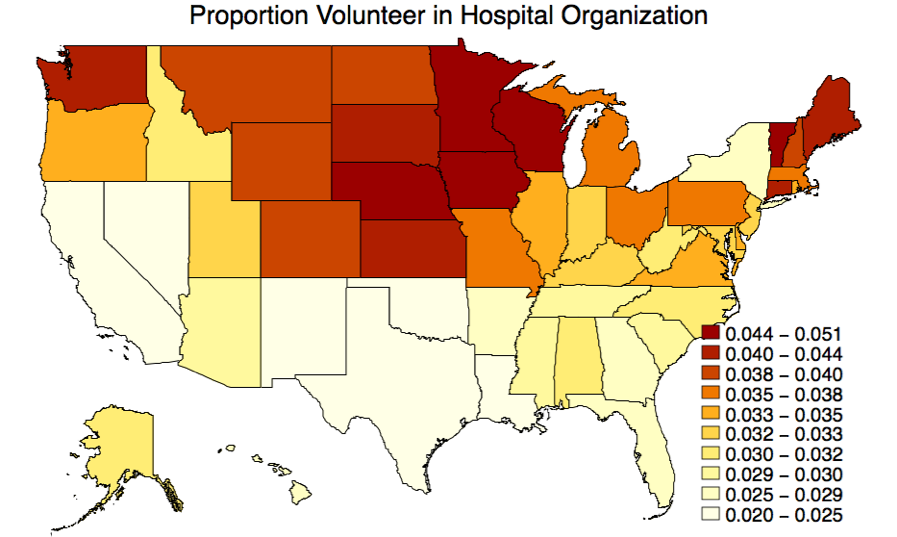 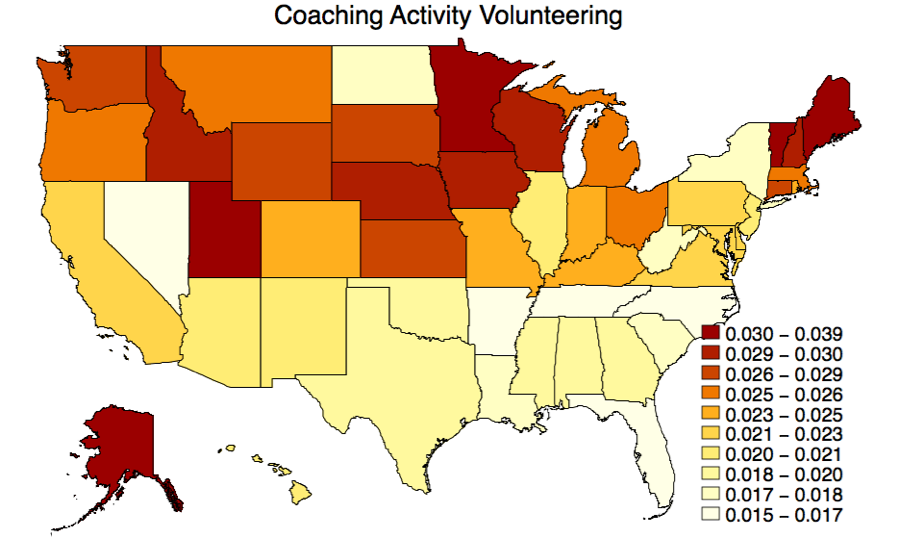 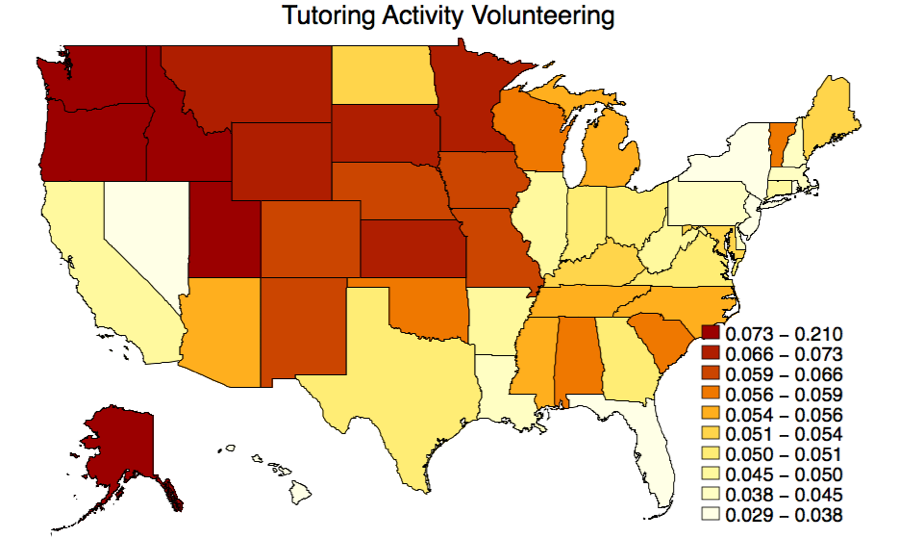 (Definition: Respond to Activities question that you “Tutor or teach”, with optional expansion of definition to “Tutor or teach (includes reading to children or adults, assisting teachers, helping with homework or school projects)”) 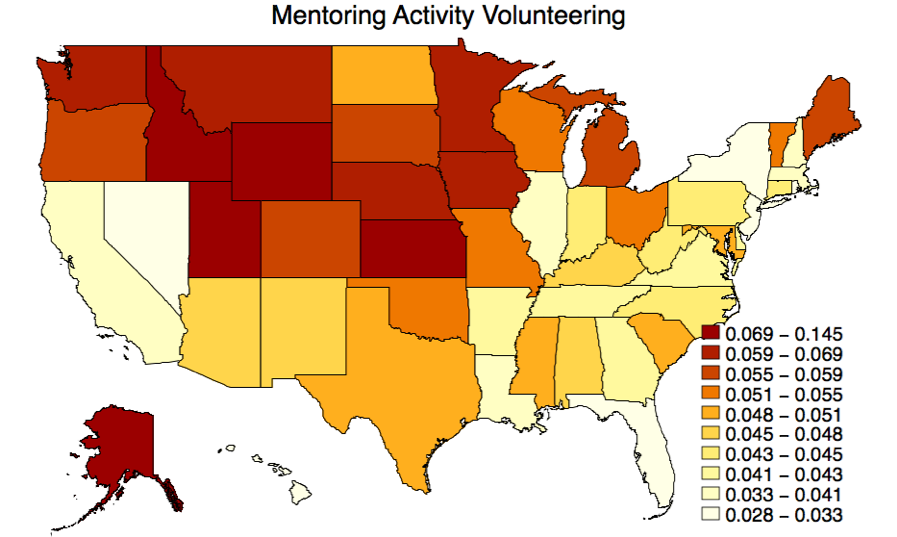 (Definition: Respond to activites question that you “Mentor youth” with optional expanding definition to “Mentor youth (includes being a Boy Scout/Girl Scout Leader, Big Brother/Big Sister, or engaging in other mentoring activities)”) 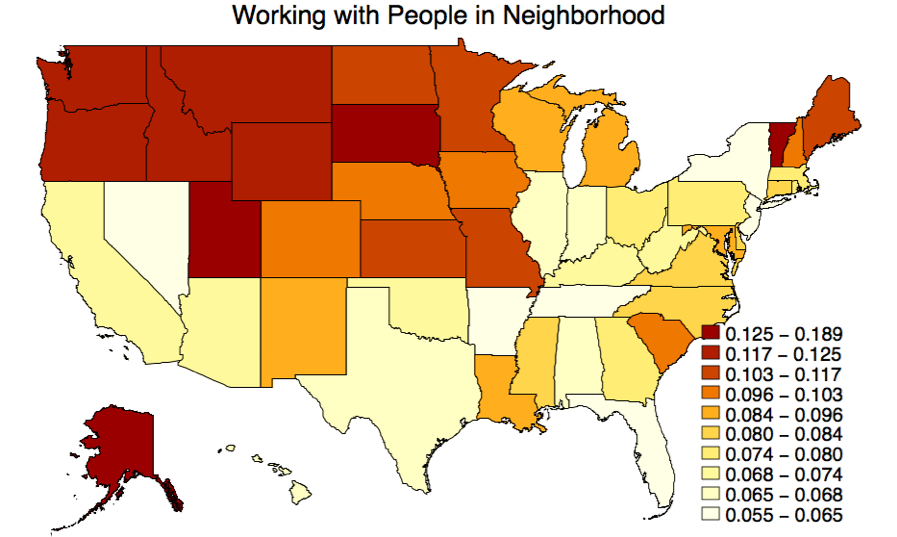 (Definition: Since September 1st, 2011, (have you/has he/has she) worked with other people from (your/his/her) neighborhood to fix a problem or improve a condition in your community or elsewhere?”)

Once neighborhood engagement volunteering is asked, the Carolinas and some of the rest of the Southeast emerge as being similarly civically engaged as their northern peers. This fits into the stereotypical “neighborliness” of the Southeast.

If we look at donating money rather than time, our Elazar-type patterns are not quite as prominent. Southeastern states often more closely resemble their midwestern peers. 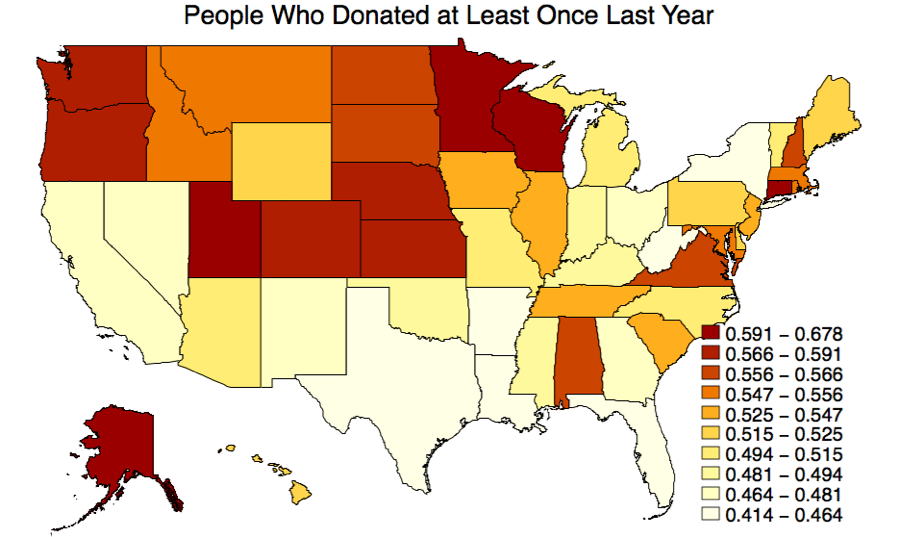 (Definition: “Now I I’d like to ask just one question about donations to charitable and religious organizations. Charitable organizations focus on areas such as poverty and disaster relief, health care and medical research, education, arts, and the environment.

During the past 12 months, did (you/he/she) donate money, assets, or property with a combined value of more than $25 to charitable or religious organizations?”)

It should be noted that on average, about half of Americans donate to charity.