I am using the standardized test i-Ready to showcase my students completing over one year’s worth of academic growth in a single year. 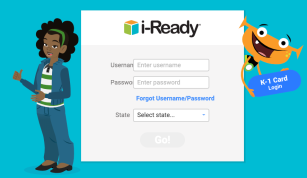 Curriculum Associate’s i-Ready an online learning tool and growth measure for both reading and math K-8. In my math class, I use it to measure math growth throughout the year. Students take a math test at the beginning, middle, and end of the year. This measure is used school-wide by the math department to measure academic growth throughout the year. This test is “adaptive”, i.e., changes its questions according to how students are doing on the exam. For example, if a student answers a 3rd grade geometry question correctly, the test will challenge them next with a 4th grade geometry question. If they answer the 3rd grade geometry question incorrectly, the test will see if they can do a 2nd grade geometry question. Each student therefore gets a different set of questions depending on how they are testing. After about an hour of testing, the test will give a score and what grade level the student is at “overall”, in “algebra”, in “numbers and operations”, in “geometry”, and in “measurement and data”.

Assuming that the student is putting their best effort into the test, the test is an accurate, holistic measurement of a student’s overall mathematical knowledge. Unlike other standardized assessments, i-Ready has the flexibility to show that a student who is four grade levels behind has grown to two grade levels behind even if they did not fully master grade-level standards. While I do push all of my students to master grade-level material, this test is invaluable in measuring their overall growth. I started the school year with 0% of my students proficient in mathematics, as measured by PARCC or i-Ready, and my school as a whole has 5% of students proficient in mathematics (“on grade level”). I-Ready allows me to still measure overall student progress.

The example questions shown below were taken from this pdf provided by Curriculum Associates, as I cannot login to the student-facing material as a teacher. As previously explained, i-Ready tries to “hone in on” where exactly the student is mathematically. The program will give students progressively harder questions as they get questions correct, and easier questions if they get questions wrong. This lets the program effectively guess and check until they figure out at what grade level the student is operating at. The test does this process for numbers/operations, algebra, geometry, and measurement/data separately, as it is quite possible for a student to be strong in one domain but weak in another. As can be seen in the example questions, i-Ready gives a variety of conceptual, numeric, and word problem questions.

For my lower-level ELL students, I typically allow them to use google translate to assist them with the questions, but I otherwise do not allow any students on other websites as they take the test. Since i-Ready is a computerized exam about mathematics, I do not want English language skills to be a barrier to students fully accessing the test. Much of the test, as can be seen above, involves word problems. By allowing students to translate these word problems on google translate, accessibility to the test is increased. I worked with the ELL teacher to determine if an ELL student was prepared to take the exam without Google translate or not.

I-Ready is scored on a scale of 100 to 800 points. The score bands are larger in the younger grades than older grades, so one year’s worth of growth slightly changes depending on where the student’s starting point was. For all my students, one year’s worth of growth was either 12 or 13 points. As seen below, 508-574 is considered “on grade level” for a 7th grade student. More specifically, that range covers where students should be in the beginning, middle, and end of the year. Since the standard deviation is around 10 points, there is about a 20-30 point range for any of these scores.

More specifically, there are different ranges for being where a 7th grader should be at the beginning, middle, and end of the year. Since my students started out so low and it is my school norm, I considered any score above 508 to be “on grade level”. While it is the school norm to consider “early 7th grade” on grade level even if students do not reach it until the end of the year, this does mean that students are considered on grade level when they are still a bit behind. This does, however, still represent substantial student growth, as none of my students started off above a 6th grade level at the beginning of the school year.

I focus my data analysis on my two sections of 7th grade math that I had for the full year. There were substantial scheduling changes throughout the school year, so I also taught many other students for a shorter period of time and/or was not their primary math teacher. I chose to analyze students whose growth I could attribute to my work with them as their primary math teacher for the full year.

Spreadsheet of student’s progress in beginning, middle, and end of the year. As is my school norm, this only shows students who I taught all year and were present for all three exams.

There are a few anomalies in the data despite overall strong growth trends. It should be noted that the end of the year test was taken in mid-June after students had already taken PARCC, Reading Inventory for their English class, a science standardized test, and a social studies standardized test. I worked with students to stress the importance of the exam, but many were still tired from two months of standardized testing at our school. Additionally, by this time of year, absentee problems had worsened for many students, and there were several who were not in school present long enough during the final testing window to take the end of the year test. Additionally, there are some anomalies in the table above, such as the student in row 20 dropping 115 points in his end of the year test. This is because the student rushed through the exam and refused to retake it prior to the deadline.

Class A grew the most of the course of the school year. As seen below, even by the middle of the year, students in class A had a median growth of a 1.5 years worth of growth.  By the end of the year, they had made median growth of 1.8 years worth of growth. Students tracked their i-Ready growth throughout the school year, and we had individual conversations about their data after each exam.

While my teaching throughout the year was focused on rigorous, grade-level content, I consistently scaffolded lessons according to the data I received from the beginning and middle of the year tests. I often grouped students homogeneously based on these results as well, often for the subdomain we were specifically working on (i.e. their algebra scores if an algebra unit, geometry scores if a geometry unit). This allowed me to review previous material as necessary. For example, while working on manipulating rational numbers, I included a substantial amount of review about place value, decimals, and fractions because the i-Ready data revealed the vast majority of my students struggled with these basic skills. By the time my students took the middle and end of the year exams, they were prepared. We had reviewed basic math skills alongside rigorous, grade-level content so consistently that students made almost two year’s worth of growth by the end of the year.

(Note: There is a substantial amount of “Not Completed” because I had many students enroll half or three-quarters of the way through the year, and this class had a higher concentration of chronically absent students. Chronically absent students were often not present in school long enough to have taken the end of the year test, despite my best efforts to contact their parents.)

While all subdomains showed growth, some of the greatest growth occurred in math content areas that I realized students were not previously exposed to. I had multiple students tell me that they had been taught no geometry or statistics in the past. Despite these being secondary math standards, I made an extra effort to devote more time to these domains because I did not want high school to become the first time students had ever had to find area or analyze a graph. Some of the most dramatic growth occurred in numbers and operations and algebra, as these domains are the main focuses of the 7th grade math curriculum. 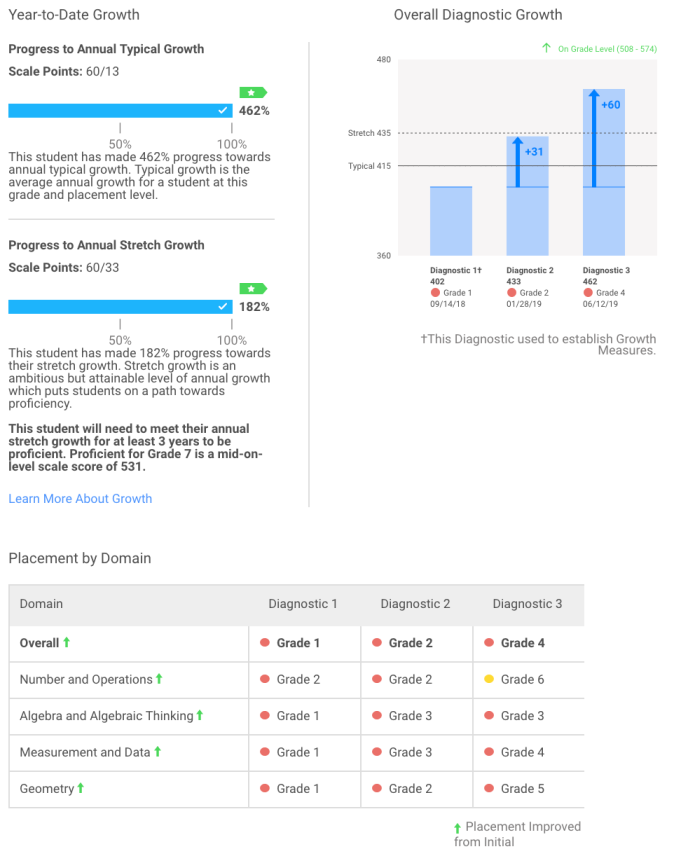 For example, student 24 (above) began the year at a first grade level (the lowest score in her class), moved to a second grade level middle of the year, and ended the year at a fourth grade level. In numbers and operations specifically, she moved from a second to a sixth grade level, from five to one grade level behind. When differentiating instruction, I focused much of her supplementary work on number sense and number operations, knowing that her later math career would remain extremely difficult if she still did not understand basic division. Other domains followed suit, growing three grade levels overall from the beginning of the year. This student grew substantially because their work was appropriately scaffolded while she was challenged with grade-level content. If she continues this dramatic academic growth, she should be on grade level within a few years. 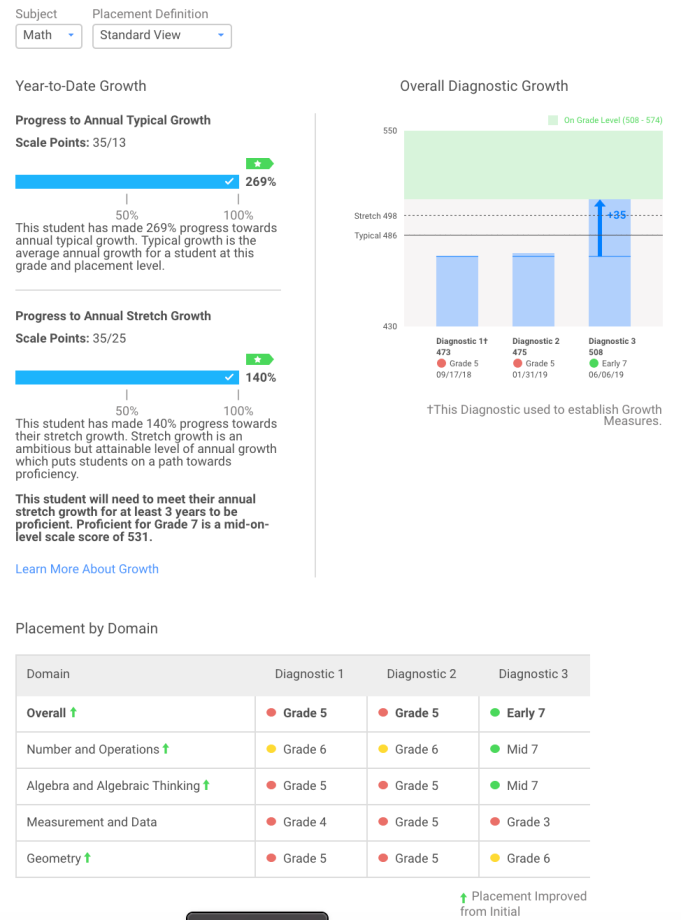 Student 4 (above) started off the year relatively high for her class, two grade levels behind. The student struggled to give their best effort the first half of the year, and we had a deep conversation about how their data showed that they were not growing mathematically. The student and I made an action plan for increasing homework completion and trying harder on tests. I agreed to let the student take breaks, as they struggled to maintain their focus for long periods of time. I consistently pushed the student intellectually by giving them the most challenging differentiated work and homogeneously grouping them with the highest students in the class. Student 4 took the longest to finish their end of the year test, but it paid off by demonstrating that they were, in fact, on grade level. This is particularly true for the two subdomains that the bulk of the 7th grade curriculum is centered around, numbers/operations and algebra/algebraic thinking. The student was very proud of their work at the end of the year, and got to see that hard work does pay off.

Back to Dramatic Academic Growth